"Our mission is to provide quality, high-value marketing products and services that result in substantial benefits to our customers. Appleby Arts conducts its business based on the principles of ability, efficiency, and expertise."

Appleby Arts is a family-owned marketing business based in Boulder City, Nevada. We have decades of experience and specialize in the latest multimedia marketing techniques.

We keep up to date on the latest technology so that we can skillfully provide the most advanced marketing products and services available. It is the philosophy of Appleby Arts to form long term relationships with our customers. Our main goal is to educate and assist individuals and businesses in developing better promotional strategies.

Besides the excellent marketing services that Appleby Arts has provided to our clients in our decades in business, Appleby Arts has also achieved a reputation for quality in our local community. Appleby Arts has received several local Awards for our exemplary service, has consistently participated in local Events, and is involved with numerous local Associations.

Appleby Arts was responsible for providing the photographs and creating the graphic design of the Mike O'Callaghan - Pat Tillman Memorial Bridge Collectors' Envelopes - Numbered Series, which can be purchased at the U.S. Post Office, Boulder City, Nevada. Learn more at the Dam Bridge web site.

Appleby Arts was responsible for providing the photograph and creating the graphic design of the Boulder City License Plate, which can now be seen on vehicles traveling the streets of Boulder City and other Nevada communities. 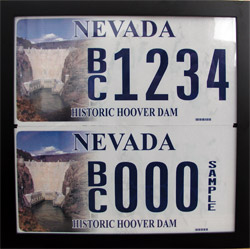 Brad Appleby, Boulder City resident and owner of Appleby Arts, has been voted President of the Boulder City Chamber of Commerce.

He ran his first Chamber meeting Tuesday and will be officially sworn in at the Chamber's installation celebration Monday at 6:30 p.m. at the amphitheater.

Having seen much of the world in the Air Force, the retired staff sergeant made Boulder City his home because of its hometown feeling.

"I've traveled all over the country, to Europe, the Philippines and Iceland," said Appleby, who owns his marketing, web design and graphics company with his wife, DeAnne. "This is the place I decided I would love to settle in. It has a great hometown atmosphere and the people help out in anyway possible.

"In Boulder City there is such a sense of pride in the people and that's why I love to get involved with it."

Since opening his business in 1999, Appleby made a point of getting involved in the community quickly. Appleby Arts joined the Chamber of Commerce and he was voted second vice president by 2001. He moved on to first vice-president last year.

Originally joining the chamber to promote his own business, Appleby discovered he really enjoyed working with the people of Boulder City and the local businesses.

"It was very different that I expected," he said. "It was a new experience at the time. We starting getting involved by working on the Chamber's web site and maintaining it for free.

"DeAnne and I believe in giving back to people because it makes us feel good."

Now that he is President of the Chamber, Appleby has titled this year's theme as "Destination Boulder City" with a goal of promoting the city as a destination and attraction for both its proximity to Hoover Dam and small town quaintness.

Chad Blair, the outgoing president's theme was "Back to Business," promoting various businesses in the city through mixers and bringing customers to the door.

Appleby said his goal this year is to market the town itself more, instead of isolating individual businesses.

"I have a lot of marketing ideas that will help put the Chamber into a more public view." Appleby said. "I am looking at the Boulder City Marketing Committee and I feel it goes beyond the Chamber.

"I want to pull together the entire city and open it up to everybody to help promote each other's activities. Instead of one person working by themselves, we can help educate the city to promote itself."

Since his member business is in the marketing arena, Appleby said this is an exciting time in his life because he can use what his company does as an asset to help the Boulder City Chamber of Commerce, which in turn helps the city.

According to Chamber Executive Director Jill Lagan, Appleby brings many opportunities to the business organization.

"Brad wants to bring more tourists here and to open their eyes to what Boulder City has to offer," Lagan said. "We are the closest little getaway and are much closer than going to Laughlin or Mesquite.

"If we can inform our own residents, word of mouth spreads. It helps the economy and everybody if we bring people to town."

Besides being involved with the Chamber, Appleby is active in other community organizations. He is Vice-Chair on the Boulder City Library Board of Directors, on the Arts Council Board and an instructor at Community College of Southern Nevada in Boulder City.

As the new President of the Chamber, I look forward to bringing my marketing expertise and the resources of Appleby Arts into play in helping to implement many of the exciting projects the Chamber Board and members have been talking about throughout the last year. The Chamber’s theme this year is “Destination Boulder City” and we mean it! With the help of local businesses, the Chamber hopes to transform Boulder City into a true tourist destination. Tourism is at an all time low in many parts of the world. Things have changed here, too. Many local businesses that have relied on walk-in customers for years, now need to work harder for those same customers. By working together, Boulder City businesses can bring those sought-after customers to “Destination Boulder City.”

A great example is the concessionaires of the Lake Mead National Recreation Area, who have banded together to draw tourism through their program “Fun on the Lake,” a cooperative advertising campaign featuring a web site, television commercials and a brochure directed at the Las Vegas market. Their theme, “A Treasure Right In Your Own Back Yard” speaks volumes. Boulder City has more “treasures” to offer than most small, quaint, tourist towns in the Southwest, many of which continually struggle to attract tourists. Good food, great shops, nice places to stay, fabulous recreation, loads of history, extreme sports and Hoover Dam. It’s time to bring all of this valuable collateral together for the benefit of our city.

As Boulder City businesses, we can begin by gathering information about Boulder City and educating our local residents. Many of our own residents don’t even know what “treasures” are offered right here! The Chamber’s web site is a wonderful educational resource for Boulder City. All Chamber business members are listed under their respective categories on the web site. Just choose a category and you will get a list of all of the Chamber businesses that offer your desired product or service. Take advantage of this great resource and spread the word about it! As the Chamber’s new President, I would like to begin our “Destination Boulder City” campaign by posing a challenge to all of the business owners of Boulder City, as well as our local residents. When you go into a local business, also go into the business next door. Attend Chamber mixers once a month and make an appearance at your neighbor’s ribbon cutting. Find out for yourself what we have to offer right here in Boulder City and help spread the word.